The big adventure at the Firefly Resort was on Wednesday.

After breakfast we met our taxi to begin a tour day that included a local village, a school, a rice processing farm, and a local family compound and temple. Called “The Balinese Experience”, this was a definite highlight of the week.

We arrived at the school (ages 6-12) and while we were waiting for the guide to talk to us the students were on break and hovering around the courtyard watching this group of tourists with curiosity. A couple young girls came skipping up to me and tugged on my shirt. “Your name?” The smaller girl with her two front teeth missing asked. I told her my name was Sara and asked her what her name was.

She puffed out her chest and said “My name is Rosa.” And then the two girls giggled and backed up to join some others watching us at a safer distance.

We were told about Saraswati, the god of education. You can recognize her because she has four arms and is always holding a book (represents learning), a linked chain (representing connections), a string instrument (representing art and music), and has a peacock and a swan at her feet (representing travel and learning from other cultures).

Behind the statue was the courtyard in between all the classroom buildings, the library, and the office.

(There was actually a change to the school system while I was in Bali. The students used to have school six days a week, Monday-Friday 9am-2pm; on Saturdays they would focus on a hobby like art or dance. But then the school system changed and school is now only Monday-Friday from 8am-3pm, with optional classes incorporated into some of the days.)

The students clearly enjoy this tourist intrusion that must happen pretty regularly, and they enthusiastically belted out a couple of Balinese songs for us when we came to say hi at a couple of the classrooms.

We then wandered further through the village and came to a rice processing area with some farmers raking out rice on slightly sloped concrete ground. If it rains they pile the rice up at the highest point and throw a tarp over top.

The rice was drying in the sun before the husks would be removed (by machine) in a nearby building.

Balinese eat so much of the rice they produce, none of it is exported; it is all made for local consumption. 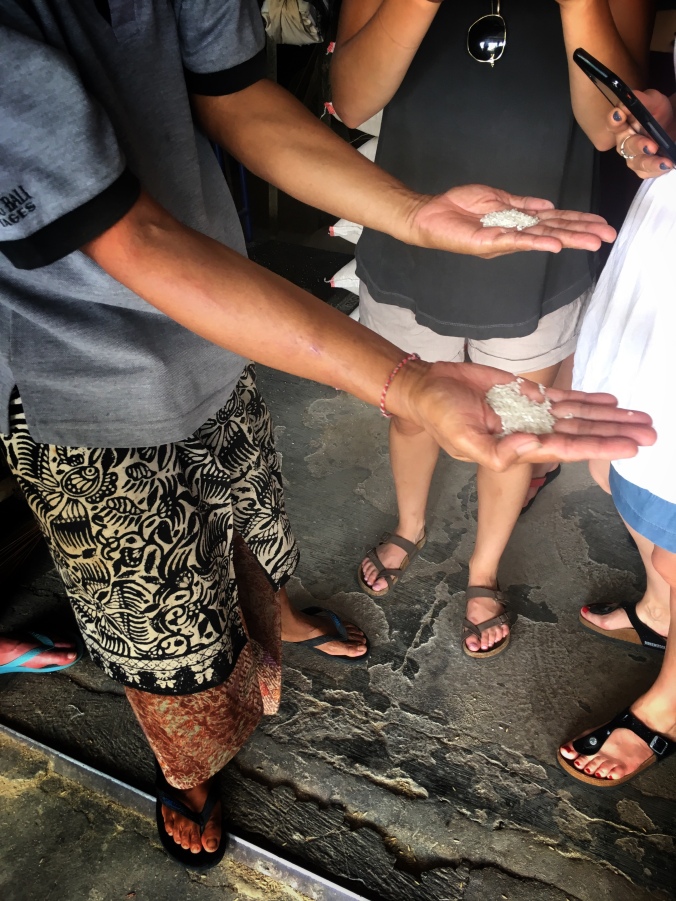 We then met up with a traditional procession including women with offerings balanced on their heads, men playing instruments, and Barong dancers. The Barong is the good spirit that protects against evil spirits, and in these parades two people are inside the head and back of the Barong, creating a dance that would be most similar to a Chinese Lion dance. Like the Korean Heatch, a sculpture of the Barong is often placed on either side of the entrances or gates of homes and temples for protection.

We were given sarongs to wear and we followed the parade, where we all got the chance to try and balance the tall ‘banten’ offerings on our heads. 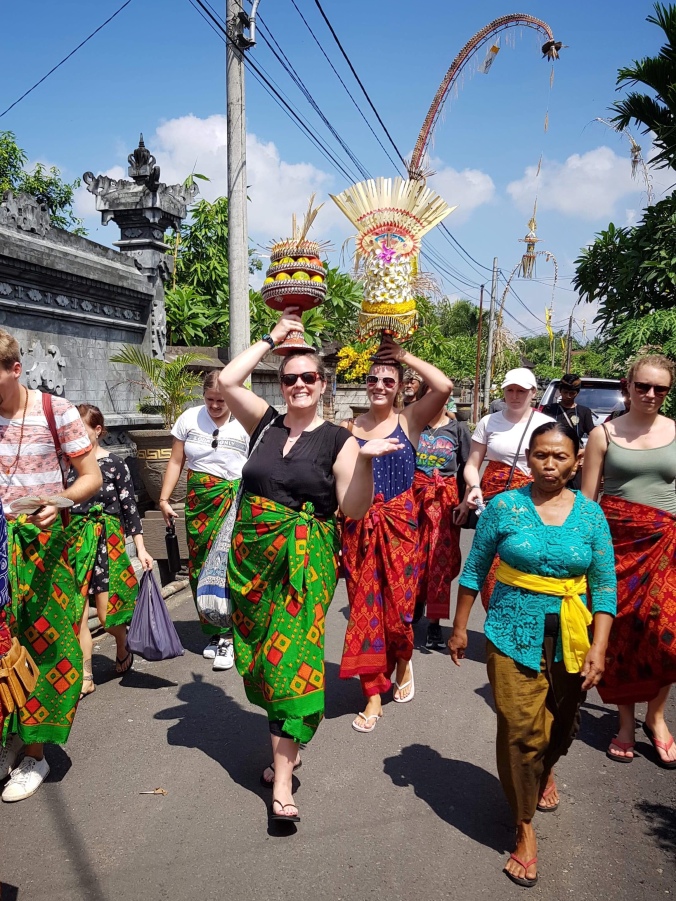 When we arrived at the front gate of the house we had garlands of frangipane flowers placed around our necks and had flower petals tossed as a blessing over our heads.

Three generations of a family lived here. Grandparents, parents, and sons lived in three different bedroom buildings, and they shared several other buildings in the compound. The buildings all have separate uses. Three of them here are bedrooms.

This one is where they play music or relax, and store the family’s rice up above where it is dry and away from animals. 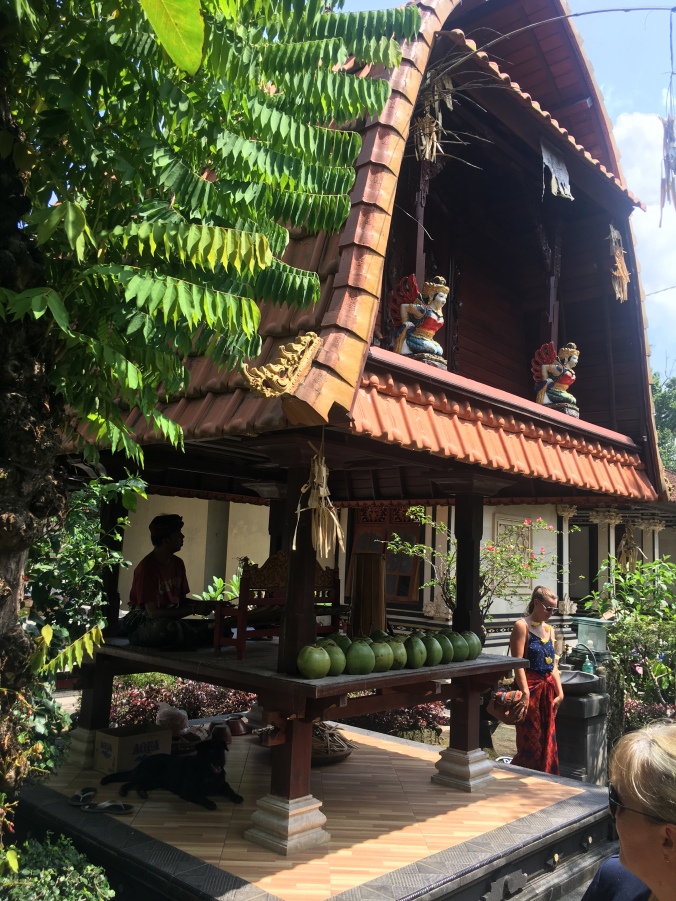 This ornate space is for celebrations as well as religious ceremonies like funeral ceremonies.

The youngest son of the household gave us a tour and talked to us about Balinese home life.

For example, the head of the beds always points north or east only because the head is considered holy. In a similar fashion, in Bali you do not touch the head of another person; especially if they are older than you, out of respect.

Two friendly family dogs followed us around the entire time.

The family has their family temple in the compound, and worship here every day. In a temple (family or village or public) there are 3-10 ‘sanga’ (3 is a small temple, 5 is a medium, etc. The largest temple would have up to 10).

The grandmother blessing us with holy water before going into the temple.

We were also welcomed to the family home by being given a gift of a bracelet called Tridatu; made of red, white, and black yarn and tied on the right wrist.

The colours represent the 3 gods Brahma, Wishnu, and Siwa. 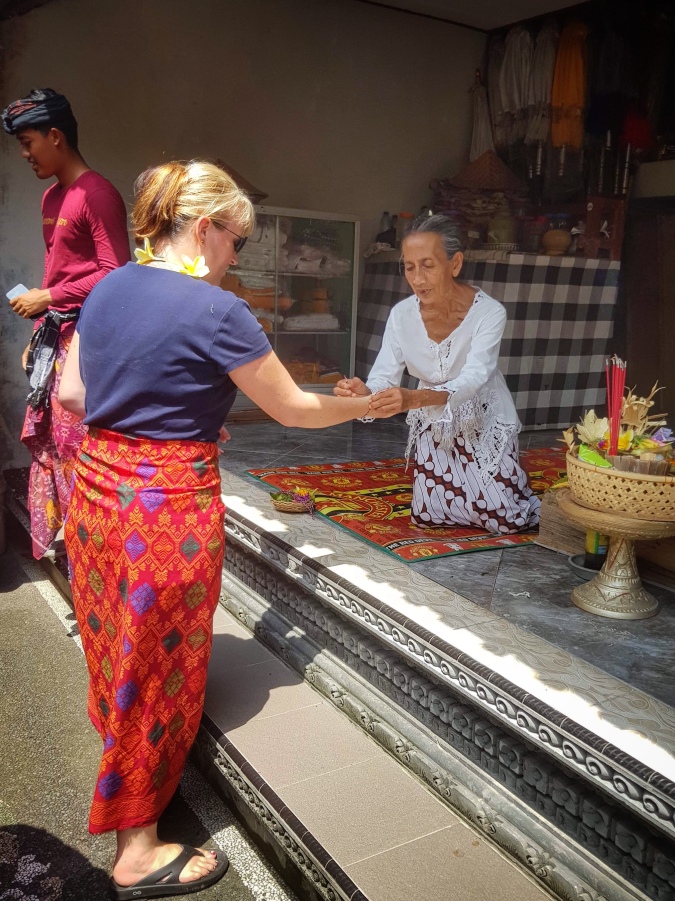 They tie it on your right wrist because Balinese give and receive with their right hand only as a sign of respect.

We were all handed those conical hats you often see rice farmers wear, and we went for a walk to local rice fields and a village temple nearby. It had a moat around it and two huge Banyan trees nearby that were wrapped in black and white and gold fabric sarongs in respect/gratitude to the trees for the fresh water they store for times of drought.

The hats kept us so cool under the hot sun. The top part of the hat actually sits above your head over a ring that sits snug to your head, so air can flow underneath.

When we returned to the family compound we were offered coconuts and watched a woman building a banten (headpiece) offering with fresh fruit and flowers. We were told that the fruit is brought to the temple as part of worship/offering, and then brought back home and shared among the family. This is a modern version with rimmed levels that hold the fruit in place. The traditional style was a vertical banana stem in the middle and fruit would be held to it with bamboo skewers pushed through the fruit into the banana stem.

It was here that we were invited to share mandarin oranges, mango, and my new favourite fruit: Mangostee!!!!

This is a very soft, sweet fruit that is unlike anything I have ever tried. And yes, it does look like giant white garlic cloves in real life, too. It’s delicious. The bitter fushia peel is soft and breaks open easily, and is often dried and made into delicious herbal tea.

We went into the family cooking area where they showed us all the ingredients and preparation involved in making chicken skewers and a spicy tomato sate sauce. They use fresh garlic, ginger, turmeric, coriander seeds, peppercorns, fresh chilis and shallots, regular and aromatic ginger, lemongrass, and lime juice. It was enuk(delicious)! 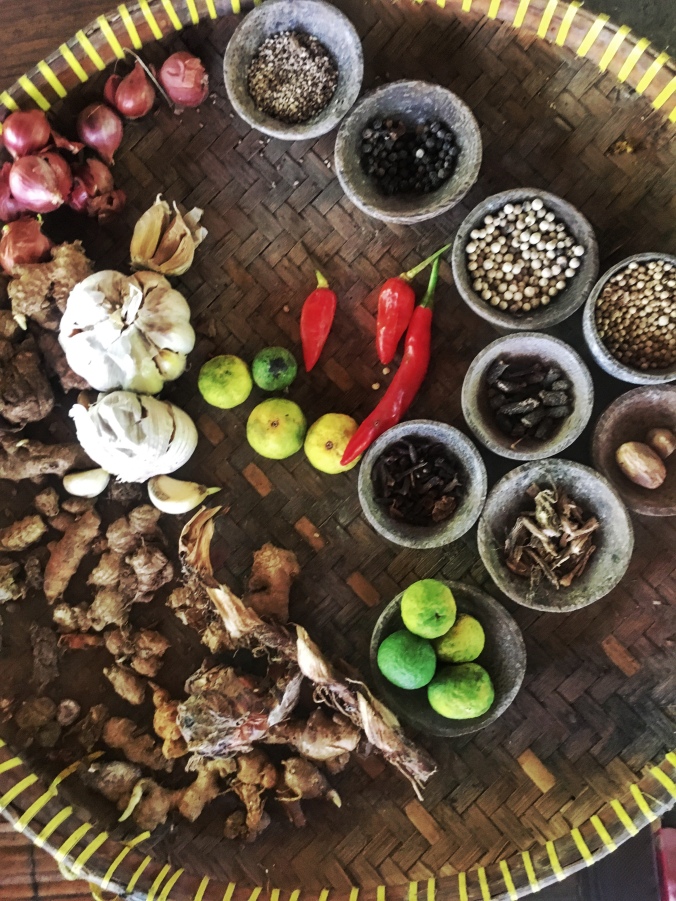 Chicken skewers waiting to be eaten!

They also were making canang offerings and had premade the baskets and were adding the gorgeous flowers to them.

We got to try the dessert called Kalpon- a boiled dumpling of sorts made with rice powder and pandan leaf for colour. They are filled with sugar syrup and boiled. When they float they are put in an ice bath and then rolled in shredded coconut.

You pop the whole thing in your mouth before you bite it or else the sugar syrup will burst out. They are delicious cold or warm, we discovered!

A few of us even made a couple ourselves.

After that we were able to visit the stable they have where they keep their cows and pigs. They brought the two cows out to the field to show us how they prepare a new plot to plant rice, and I got to try guiding the cows around as they pulled a wooden beam behind them along the top of the mud, as well as try my hand at planting new rice shoots in the field. The mud was warm from the sun and surprisingly easy to manouever through. 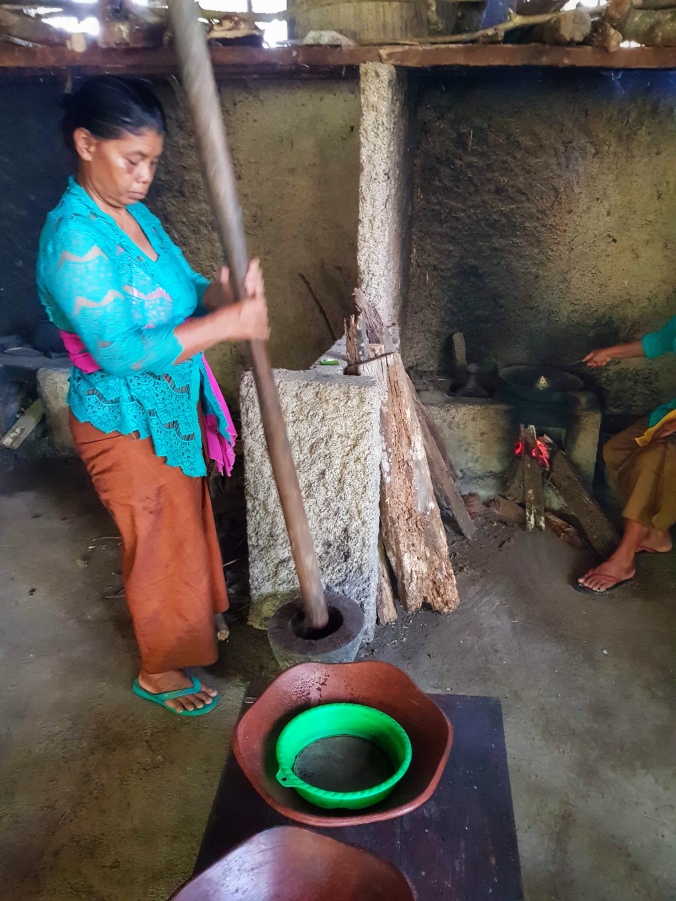 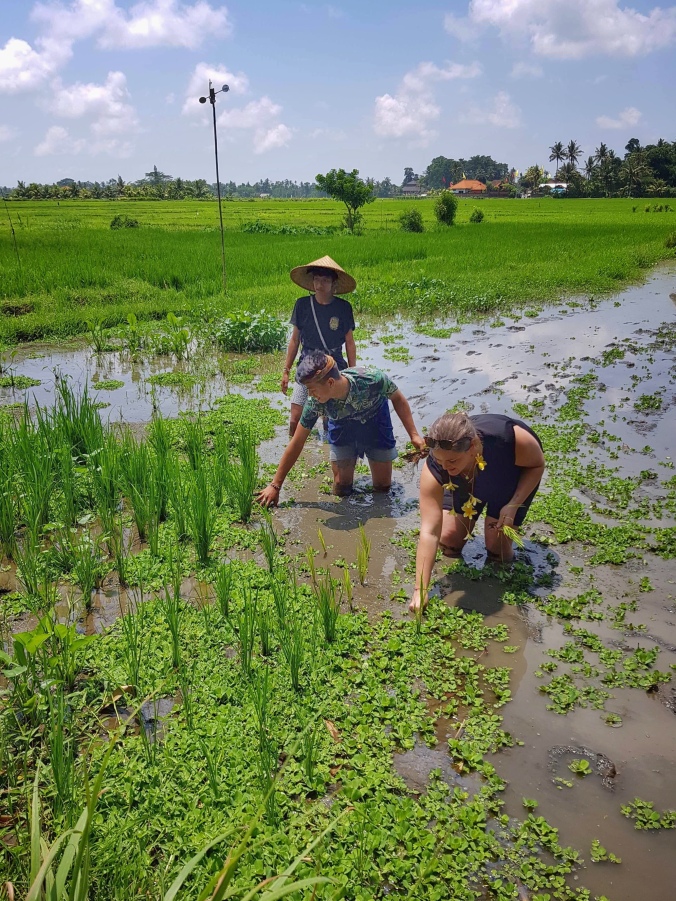 We were served the most incredible meal with the best rice I have ever tasted, and an assortment of almost-tapas style items; pork sausage, tofu, tempeh, dried fish, chicken sate, omelet, potato and corn fritters, and jackfruit and long bean salads. We also each got our own basket of seasonings and spices. 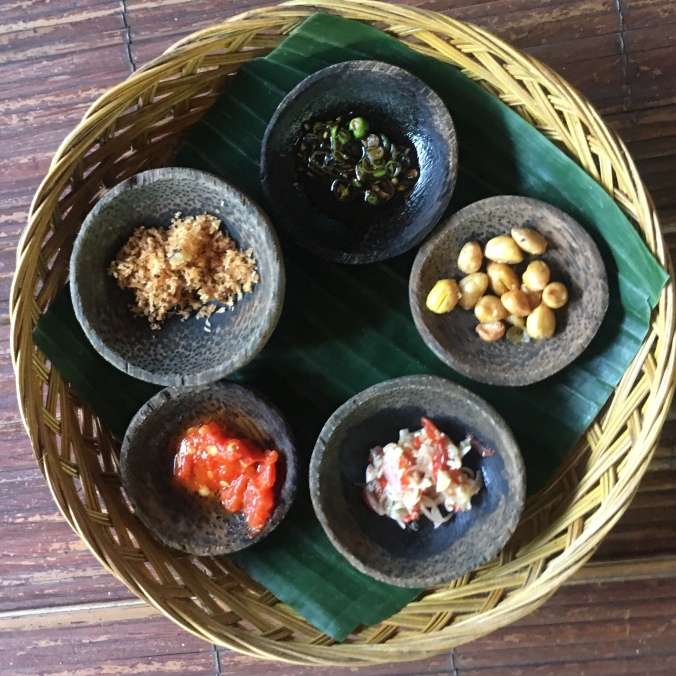 This chicken noodle soup was delicious

We were treated to traditional music while we ate.

Then down the pathway came these 4 young Balinese dancers dressed in traditional lace tops, sashes, and sarongs. The music shifted and the girls posed and prepared to dance. They were incredibly articulate in their movements right down to head tilts and eye movement.

The music never really stopped and the little girls bowed and then dance-exited off down the pathway back to the main house. Then an older girl wearing a more ornate costume and carrying a had fan entered and performed for us. She was smiling mischieviously the entire time, and for a good portion of the dance she often made eye contact with me as I was crouched closest to her in front of everyone else. I almost felt like I was in on some wonderful secret. 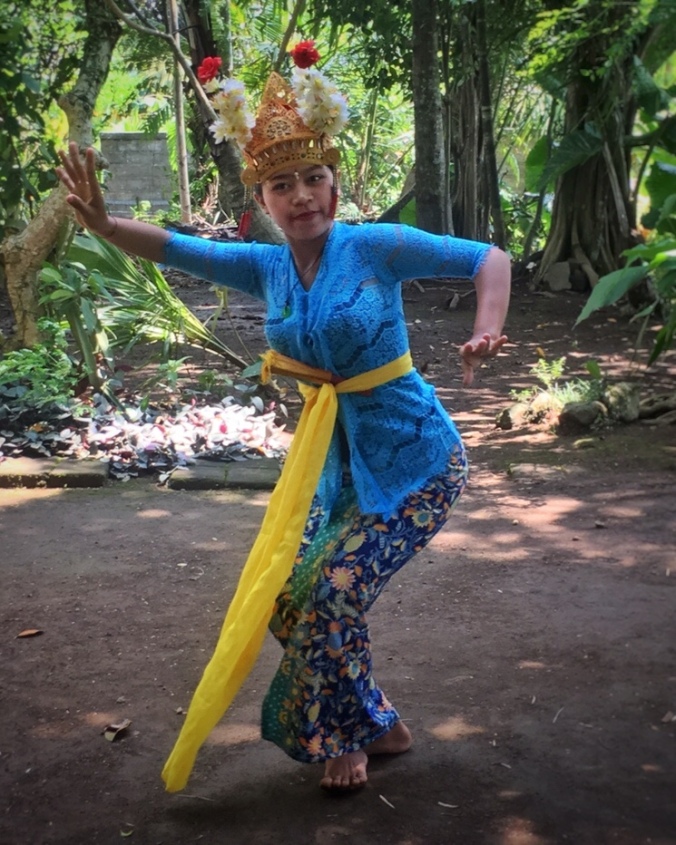 At one point she stopped dancing and pulled me up to dance with her, tying a scarf around my waist and handing me the fan to dance with. There were about 20 people watching.

After I danced with her, my friend Rachel went up, and then a young girl was pushed up by her older sister. She was clearly shy and pretty reluctant to dance so her dad went up with her and tried out the moves too, which was adorable. Her sister joined them and then an American girl jumped up and then a tall German guy (who was sort of shoved up there) started dancing too. Rachel and I joined and it became a nice little Balinese dance party. Not that we had any idea of what we were doing, but we were having a good time faking it. 😁

The music seemed like it would never end so we dance-exited off like the little girls did earlier.

We went back to the resort absolutely elated about our day. How do you top this?!