Lots of fun continued in Paris to include: Dinner at Jim’s a second time, Bastille Day, the Canal St Martin, more art and museums, shopping, and as always, food…..

Gratuitous food shot: The delicious dessert we treated ourselves to one day from the patisserie down the street

I just *had* to bring my family to meet Jim at his fantastic global weekly dinner (and of course the many other interesting guests that attend) the second Sunday they were in Paris. It just so happened to be the final game of the World Cup, so let’s just say it was solely Americans, Canadians, and Australians at the dinner, and no one seemed too caught up in the game that night. 🙂

Me and the host himself- Jim! 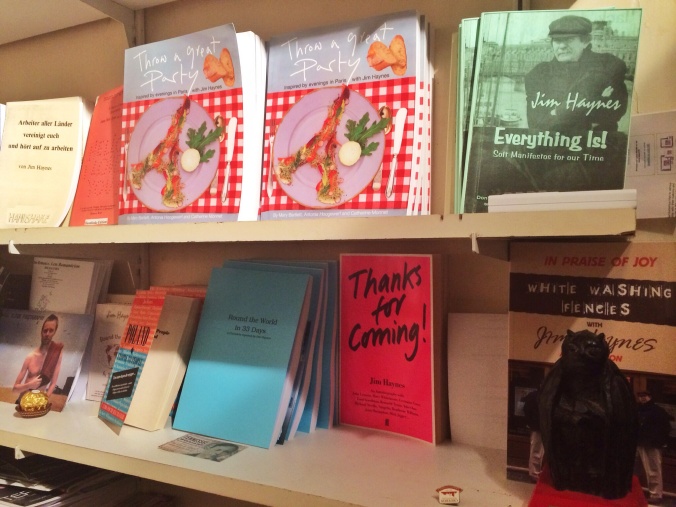 Some of Jim’s books

We learned at the dinner that the night before Bastille Day (as people outside of France call it) or July 14th (as the French call it), there is an event held at various places all over the city called the “Fireman’s Ball”. They are set up and ran by the firemen (men in uniform, anyone??!), and are mainly dances that start around 9pm and some go until sunrise, often held in the actual fire halls, and they range from family friendly music and game nights to huge dance parties in a park or square. My sister and I went to the latter. I:) t was in this huge courtyard where we often see kids playing soccer or basketball, and they had it set up with a stage and beer tents, and the entertainment (and often the alcohol) here is free, with the request of a small donation. They had live DJ’s that were just okay, with a guy dressed up in an LED coved robot outfit that made him kind of look like a power ranger at a rave club, playing an electronic drum kit along with the music. He was better than the dominatrix-dressed fiddle player who came out later with the second DJ and two less-that-interested American-flag-bikini-clad ‘dancers’…. the French have interesting taste….

To sum it up, we had fun dancing, but there weren’t enough good dance tunes and not nearly enough firemen on the dance floor. 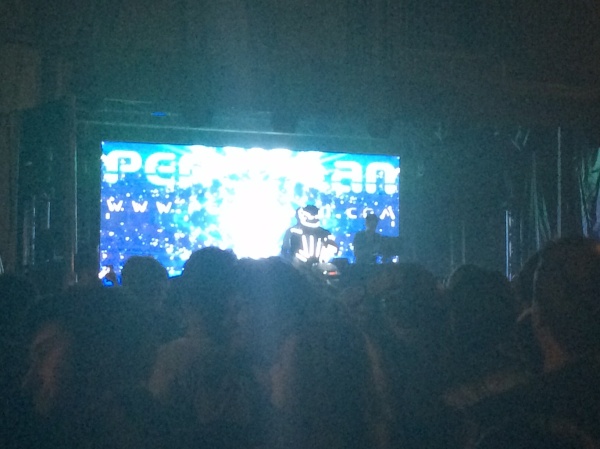 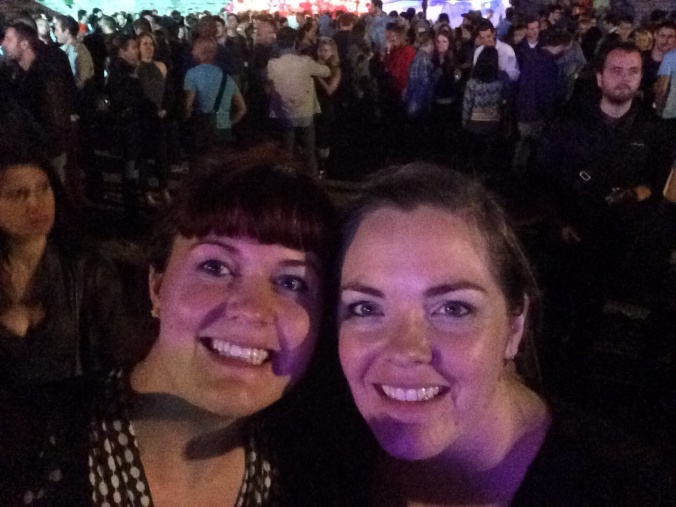 Bastille day includes a huge military parade down the Champs Élysées that we planned to go to the next morning, but after being out till 3:30am an 8:00am wake up call and the thought of having to battle thousands of tourists to possibly get a place to watch the parade and then try and fight out way through the throngs on the metro seemed less than ideal. So we slept until 9:58am, and watched the parade on TV. Brilliant idea, as the streets looked packed and we got to see all the close up shots of the different groups in the parade as well as the French leaders and staff at the end of the parade. We were told the best part to witness live was the jets flying overhead but after we saw them on tv we heard them fly directly over our apartment so that was good enough for us.

After the parade we had a leisurely afternoon and had another picnic dinner- this time at the Jardin Du Luxembourg. 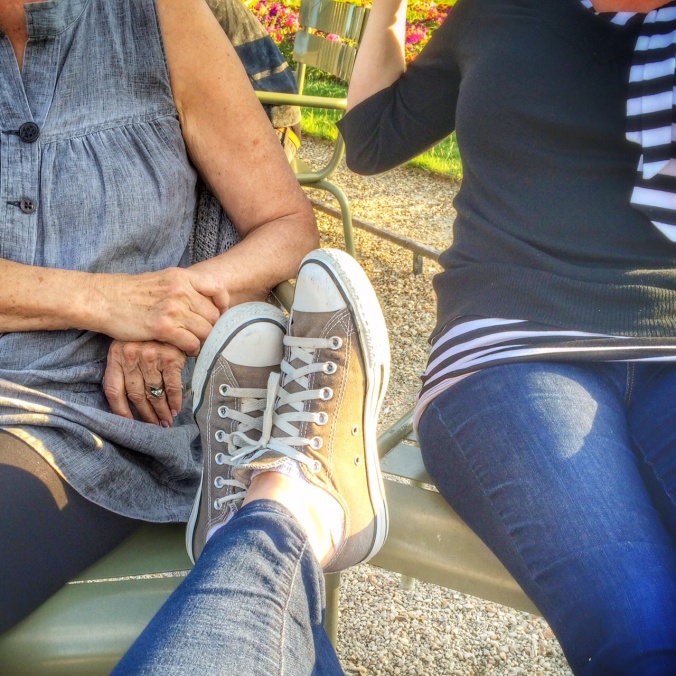 We got there at about 8:00pm stayed until the security guard whistles bullied us out at 9:15, when we headed towards to Eiffel Tower to watch the fireworks. We had decided to try renting the Paris ‘velib’ bikes to get to and from the Eiffel Tower to avoid the metro, and it was way easier than I imagined. For 1.70€, you have access to a bike for 24 hours and you can use it for 30 minutes at a time without any additional charge. It is awesome, and we just loved it.

We got to our fireworks location (just east of the Champs de Mars that we knew would be crowded), and we had some coffee and dessert before finding a good spot to sit. 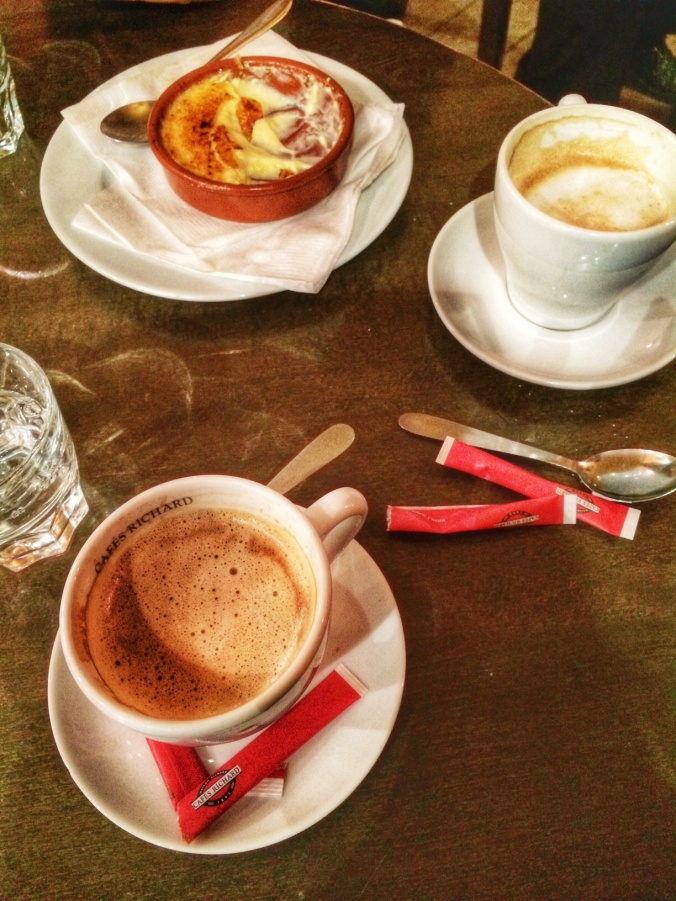 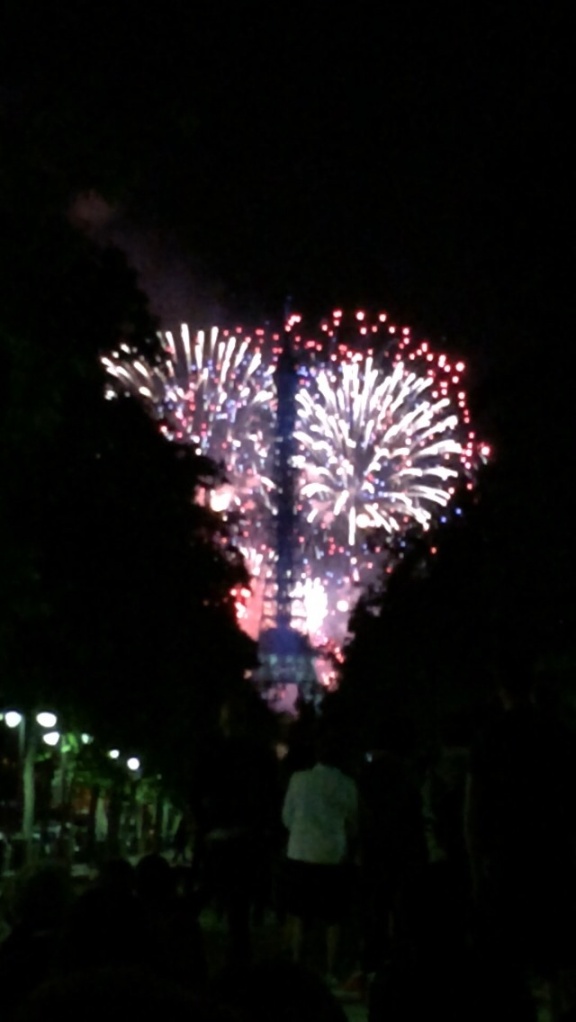 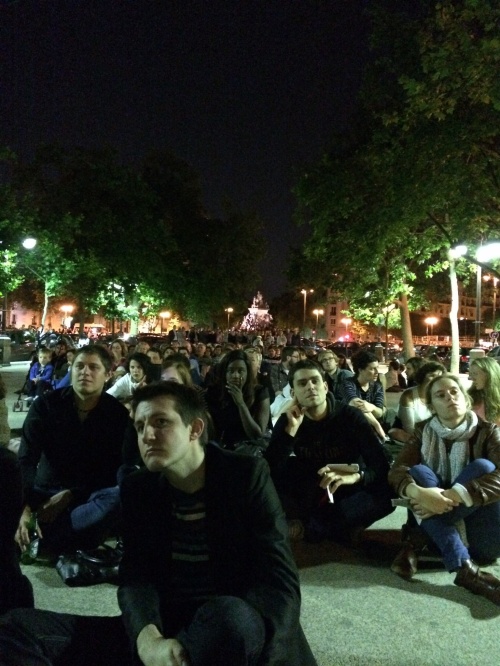 The people behind us watching the fireworks

We also finally got to Montmartre to show mum the Sacre Coeur and our favourite shops and restaurants. 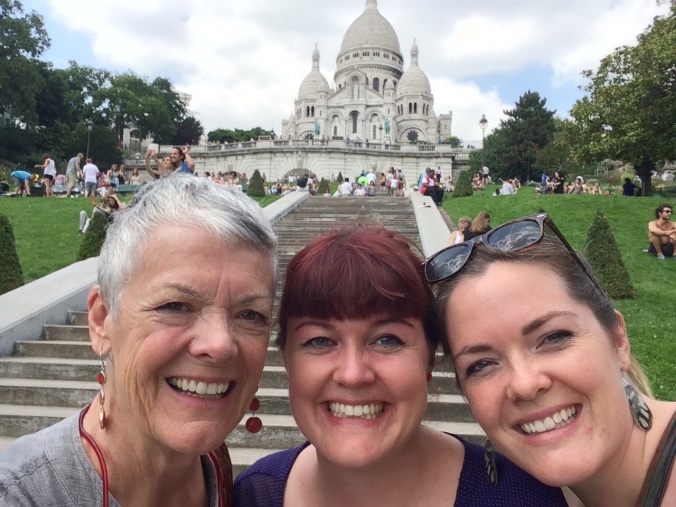 A portrait artist at the Place Du Tertre

The summer heat took over Paris on the Thursday and we tried to find any air conditioned or indoor activity we could to stay cool for the next few days. All plans included frequent water stops,  gelato, and/or a definite location with air conditioning. We googled ‘ways to keep cool in Paris’ and found that the TimeOut website had a list of 25 Cool Things To Do In Paris, which wasn’t exactly what we were looking for but there were some great ideas. One was to check out a fish and chips restaurant by the Canal St Martin called “The Sunken Chip”. This turned out to be a brilliant suggestion, and we picked up lunch and wandered over to the canal to find a shady spot to eat it. Oh, yeah, but not before my sister and the guy serving us had a mutual friend in Calgary. ?! Yup.

we also discovered the coolest bookstore we have ever been in and spent a good hour inside checking out a phenomenal collection of photography, art, and architecture ‘coffee table’ books to editions on politics and journalism, short stories, biographies, and graphic novels. It was so cool and we then entire from air-conditioned store to air-conditioned store (or not, to be perfectly honest), and all decided the St Martin area is a must-see location for a funky, off-the-beaten path feel in Paris. 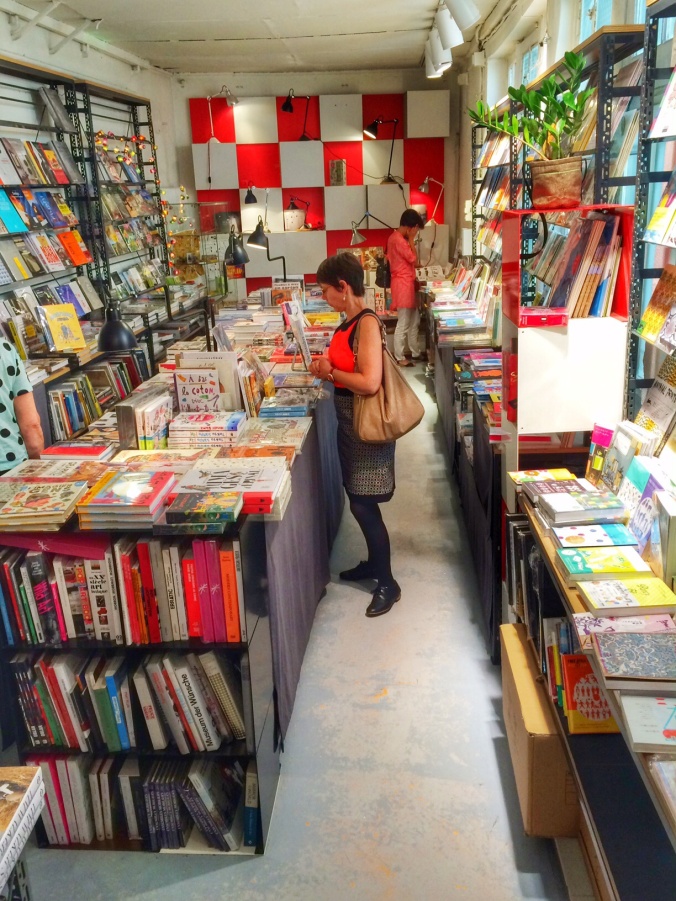 We we then went to an exhibition at La Gaité Lyrique arts centre!where there was a showing called “Motion Factory”. There had been posters all over Paris about it but we didn’t really think about it until we saw it again on the aforementioned TimeOut list. It was all about stop-motion animation, and I think we spent the longest time we have so far in a museum checking out every inch of this exhibit. There were models, designs, and actual pieces from short films, music videos, and commercials to name a few, and you could watch the full length videos at several screens set up around the space. In one room, there was even a group of people working on a 360 degree model where they were creating a stop animation film you could watch the process of and meat while on the wall above them there was a projection of  what they had created so far! Hot day + cool museum + creative and interesting films = genius. 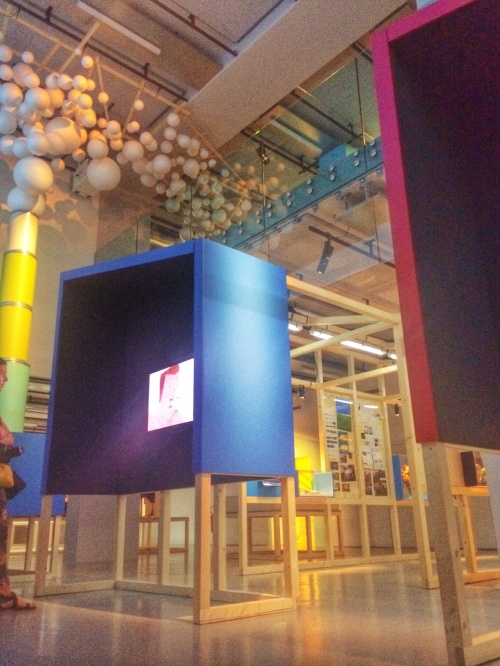 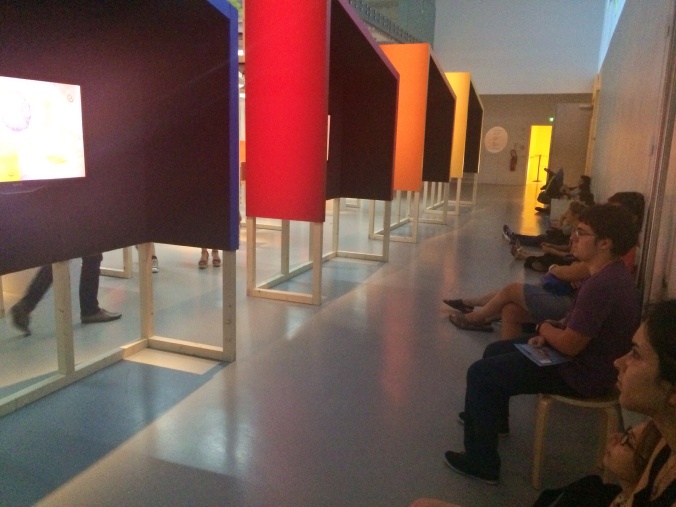 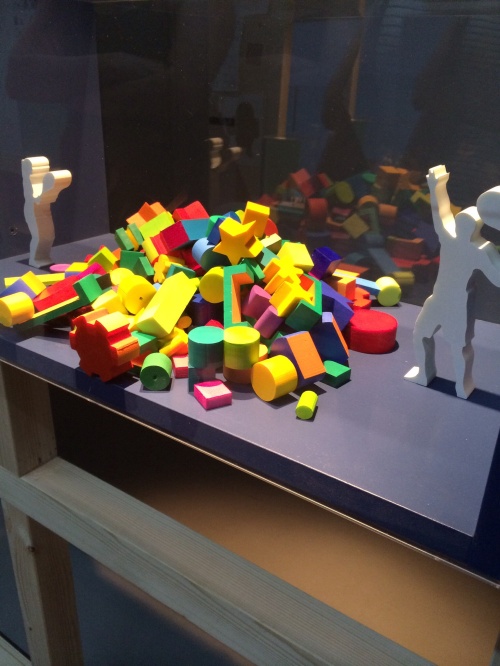 One of the many many models of a stop animation short film- this one animated a tennis ball being hit back and forth and was projected on the opposite wall.

The next post will chronicle our week heading down the Rhône river from Lyon to Avignon! 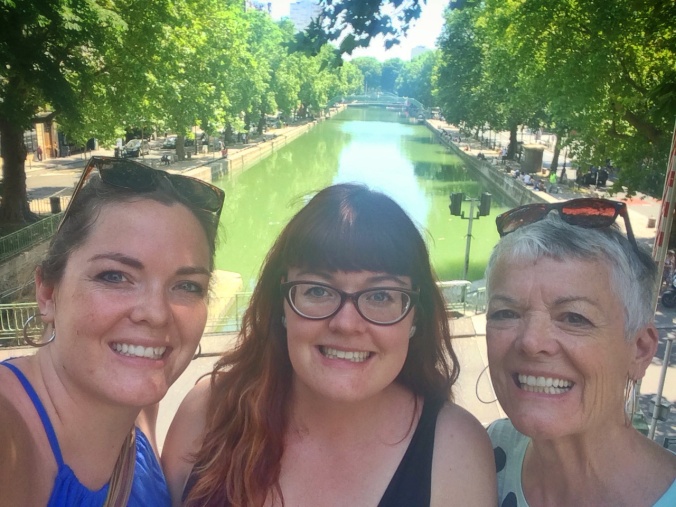 A sunny day at the Canal St Martin