More exploring,  mais maitenant, en seule.
On saturday the sun finally came out again, escaping the numerous threatening rain clouds that have been looming over Paris this week. I really was expecting warmer weather for the end of May, but I’m sure that will come soon enough. And with the mention of sun, I have  jinxed my current situation and it has ducked behind more rolling grey clouds. This wimpy Canadian is chilly again.

I succeeded in buying a Navigo pass, and got photos taken at a Metro photo booth (yes, just like in Amelie- without the zoro mask and hat). It will save me so much money to have a local pass instead of buying separate tickets or a Paris Visite pass! It turns out that the Navigo pass is not advertised on the English websites for Paris Metro because it was never intended to be used by tourists. I feel so… What’s the word… Débrouillarde! 😉
I also purchased some art supplies- a sketchbook, some sketching pencils, chalk, and charcoal. Let the art begin!! (I really wish I had thought of this before so I could just bring supplies from home that I already had.) 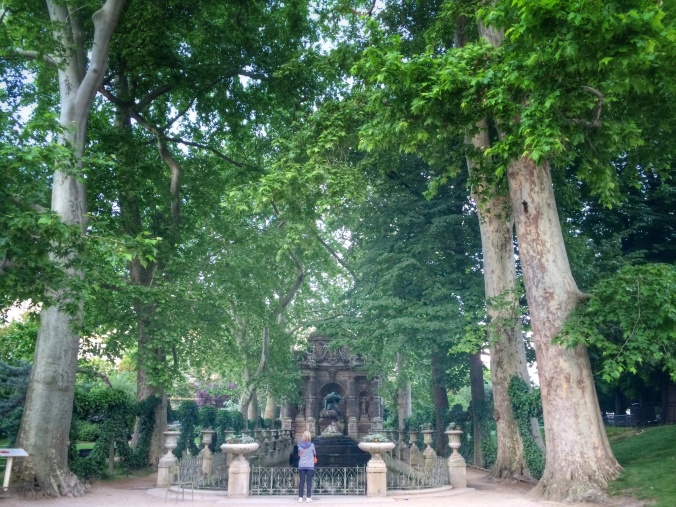 The Jardin du Luxembourg is quickly moving up the ranks of favourite places in Paris, and challenging the Jardin du Tuilleries, and this weekend it was very, very busy. The locals and tourists alike were out in droves to celebrate the sunshine. (This photo of the fountain was from last week when it was quiet!) There was also a photography installation on the grounds that I took in- WWI documentation, photos from the archives of  the French newspaper EXCELSIOR. There were photos over the years documenting the first days deployment, to women in the workforce at home, to remains of buildings, to veterans returning. It was very interesting, and there were some startling and beautiful photos.

Today I walked by a gluten free shop. Yes, even they exist in Paris. It was in the Marais (in case this is useful information for you 🙂 ), the 4th Arrondissement where I went looking for free museums today, as it is the first Sunday of the month. There are a lot of museums on the full list, but today I wanted to stay in one area- the 3rd and 4th Arrondissements, where there were many! I originally wanted to have a go to the Louvre but unlike last time I was here, it is no longer the ‘off-season’ and therefore, you have to pay for it. As I discovered last Sunday, weekends are extra nuts in Paris, so I think I’ll wait for a slightly quieter weekday… 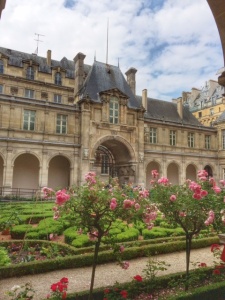 One museum  in particular I wanted to see today was Musée Picasso, but it is still closed for renovations. Hopefully in July they will be complete. 🙂 I stopped in at a museum not on my list, and spent almost two hours there: Musée Carnavalet. The garden in the centre court was stunning, and so of course I had to take many many photos…. It had some incredible models of many major buildings in Paris, and I’m not even sure I saw it all as it went on for ages. I then saw another, smaller museum, Musée Cognacq-Jay, just down the street. I also thought I might go to L’Orangerie again, but then I found a chair on the side of one fountain in the Jardin du Tuilleries, and tried sketching a statue.

It has been a long, long time, since I have done any sketching of any sort, and I feel a bit rusty!! After that I did a little people watching, and wondered if it really was this common to see so many people in (navy&white or black&white horizontal) striped shirts go by as I sat there. I stopped counting at 17 in the 15 minutes I was keeping track… :)

I also discovered more street markets, of course, mostly selling food, but also jewelry and toys and artwork, but again I only took pictures of the food…. 🙂 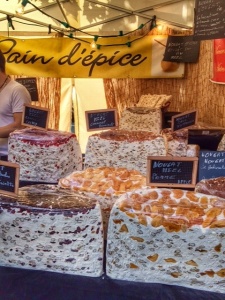 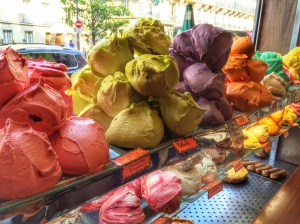 Yes, those giant Willy Wonka blobs of color are meringues….

It is really hard to not get excited about all the cafés and bakeries and crepe stands and gelato places, and all the amazing food here, and not buy numerous things every daythat are not ‘necessary’, just extremely delicious snacks. Today I gave myself an allowance of 5 Euros, and I am proud to say, I kept to it, only buying a crepe and a drink as I wandered around the city.

I went to Place Des Vosges to sit and have lunch (that I had made!), and this was when the almost-storm seemed to back off a bit, and though there were a lot of people at the big tourist spots like the Louvre, this are felt a bit more calm. still majestic, though. and all my OCD friends will be happy to know how perfectly symmetrical so many gardens and courts and other meeting places here are. 🙂

The architecture of Paris is so fantastic I just can’t get over it. Back home I’m the born-and-raised Calgarian who still can’t get over the mountains, and I’m sure no matter how long I stayed in Paris or how often I came back I would still “ooh” and “ahh” over the buildings and sculptures in this city! 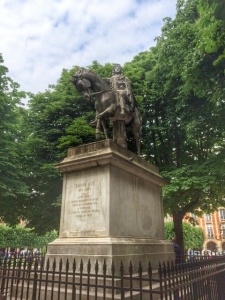 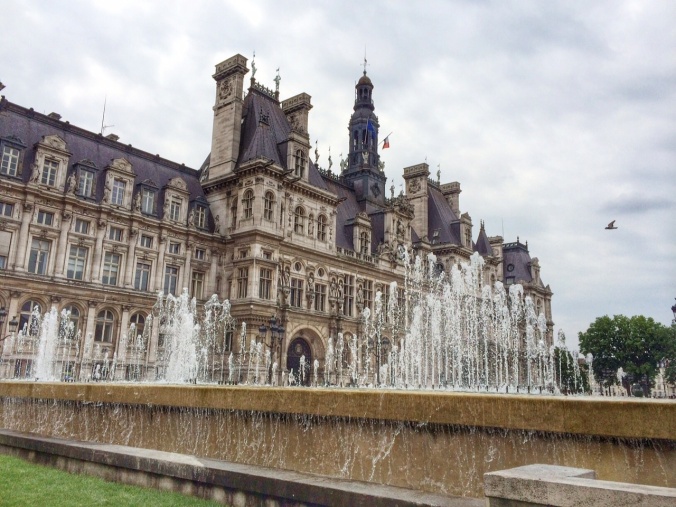 Next up: my first French class in Paris, and I’m excited and nervous! First day of school again!