After a short ferry cruise from Woods Islands, PEI, to Caribou, Nova Scotia, we stopped for ice cream just outside the tiny town of Pictou before driving to our next KOA campground in Cape Breton. On the ship we read up on Cape Breton must-see spots, live music venues, and campgrounds. Free wi-fi on the ferry was a great amenity to have. 🙂 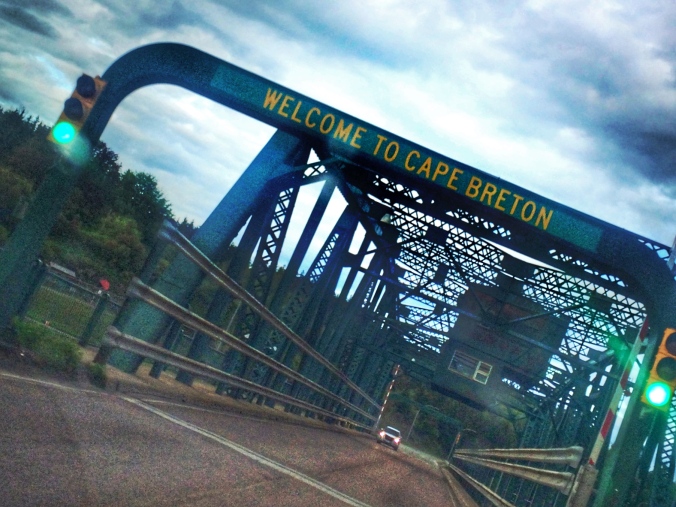 We have found that one of the best surprise-discoveries on our trip is how very much we enjoy staying in different places every night and seeing the varied scenery and natural beauty of the Atlantic Provinces. 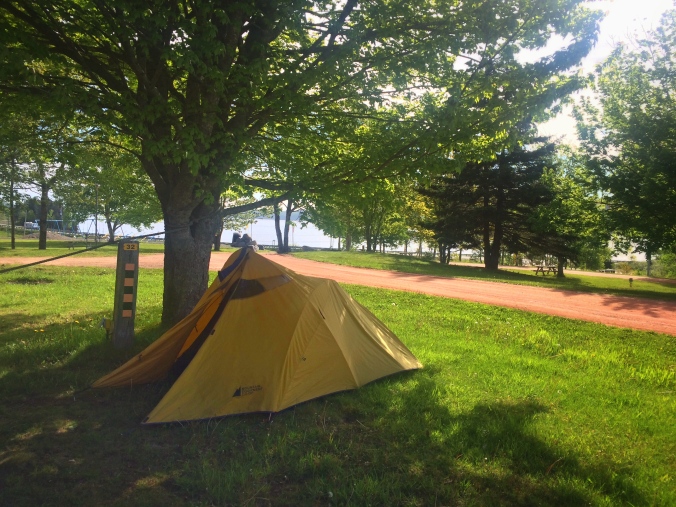 Our campsite on the Cabot Trail was another example of this. Check out this rock; blasted in the 1950s to allow for the roadway and bridge across the Bras D’Or Lakes.

(This moment of morning sunshine was a brief reprieve from all the rain and cloud that quickly rolled in within the hour.)

Especially along the Cabot Trail that circles the northwest part of Cape Breton, the rain makes for the most lush looking forests and hills, and the misty, rainy weather makes for a romantic, almost mythical landscape. 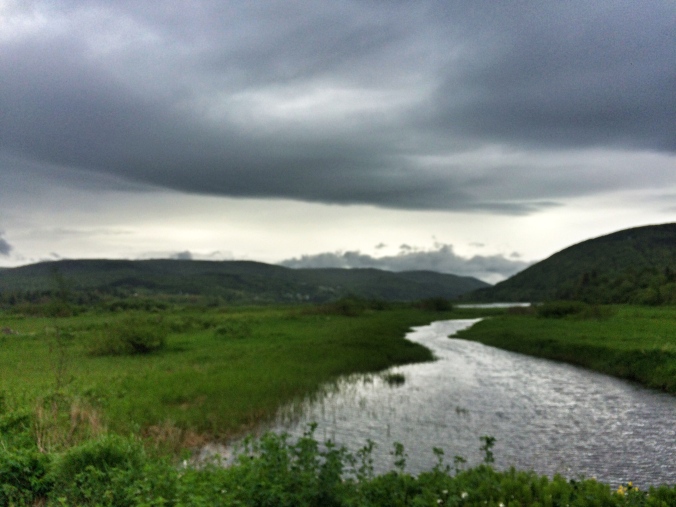 One delightful discovery was Baddeck, and the coffee shops, outdoor gear clothing stores, and art shops.

We stayed out of the rain for a bit with a great breakfast at the cafe there, and made our way along the Cabot Trail getting purposefully lost on gorgeous forested trails and backroads before stopping into The Dancing Goat and picking up the last still-warm loaf of their famous Porridge Bread, which we planned to enjoy for toast and sandwiches as we trek north.

The weather forecast was underwhelmingly monotonous, with expectations of rain straight on from lunchtime on Sunday through … Wednesday. We bravely sought a campground with the hopes of a well-sheltered tent site. And when we arrived at Plage St-Pierre Beach and Campground, we were immediately encouraged to rent their tiny, single wood cabin with a queen bed, mini heater, and barbecue. 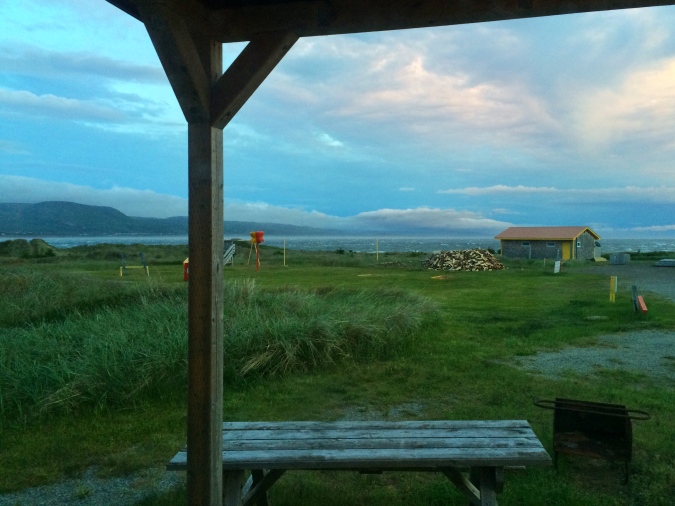 The brute-force winds that created crashing thunderous waves along the beach, and the downpour that began shortly after nightfall made us feel like the smartest campers ever. We turned on our mini heater, listened to some music, and played a couple of games of cards before heading to bed, warm and dry inside. 🙂

The wind and torrential rain pounded down all night, and even the power went out at some point. Spending the night in a tent would have likely been terrifying. In the morning we woke up to calm seas, no wind, and lighter skies. And we didn’t have a wet tent or anything to pack up!
I do have to say that the peanut-butter-and-apple-on-porridge-bread sandwiches I made us for breakfast got things started nicely, as they were delicious. The bread has a sort of molasses flavour and is hearty like a pumpernickel. It is so good!

We took off to get up to the Highlands National Park and hopefully get a couple small hikes in. Our other goal was to check out the furthest northern point at Meat Cove, and the small fishing village of Dingwall before heading into our campground by Ingonish.

The coastline is epic, with huge cliff faces and drop offs and the current weather causing great waves to curl and break and crash against the shoreline, be it sand or rocks.

It is wonderful to drive the winding Trail so close to the ocean. There are many hikes along the trail, varying in length and difficulty, so we decided to check out a couple shorter ones on our first day.
Along the Bog Trail, (known for its summer orchids and dwarf trees) as we walked along the fully constructed wooden boardwalk, we heard what sounded like dozens of rubber bands being plucked. We discovered they came from a small army of green-bellied frogs croaking back and forth, and if you paid attention to where the croaks were coming from, you could see them hiding in the water.
Another short trail to a Sole Sheiling – a hut built to represent the shelters of for an early farmer to watch over his sheep was our next stop, and it was here that we discovered the apparent local concern for coyotes in the area, as several large walking sticks were left at both ends of the parking lot for people to hike with (and many signs encouraged their use!).

As we drove through road construction further and further up the ‘mountainous’ terrain, the low clouds above us suddenly surrounded us like the thick evening fog we discovered in Nova Scotia the week before. The view disappeared or became ghostly like a Tony Only painting.

Some of the craziest winding and crumbling roads led us past North Cape up to Meat Cove, but the cold wind convinced us not to stay to long, and we bundled up and drove to Dingwall. The weather grew angrier and the fog thicker, and we could just barely make out the fishing boats tied up at docks and rocking in the waves, and see the tumultuous ocean pound along the shoreline.

Side note: I love the sound of waves crashing. It is like hearing a sharp intake of breath as the water is pulled up from the sand, and then a thunderous rumble as the frothy waves twist over to tumble down in long rolls over and over again. 🙂
We got to our campsite as the rain settled down and the fog thinned a little. For the first time so far we decided to put up a tarp over the tent, and found a sheltered campsite to also protect us from wind.

We went in search of dinner and arrived at The Coastal Restaurant and Pub,  which coincidentally (!) was the only place open nearby.

As we ate a dinner of their made-famous-by-You-Gotta-Eat-Here Ringer Burger, they seemed to be closing up for the night. (It was 7:30pm). We asked if there was a place open for drinks and they suggested the Keltic Lodge, because it has live music every night. Well, we were sold. 🙂

As we drove towards the Lodge we broke through the fog and the sun had fought its way through to make for a beautiful evening. The grounds of the restaurant and nearby golf course were gorgeous and we wandered around and took some photos before heading into the Atlantic Restaurant to catch some local music.
We proceeded to spend the next three hours listening to Rob Maclean, a Cape Breton local, play songs on request until the guests thinned out and he played a few original pieces. He was fantastic and we stayed to the very end, enjoying every minute of it (and also enjoying a slice of they spiced Guinness cake with whiskey caramel sauce).
A cool night’s sleep with lots of rain had us looking forward to spending another night inside.

We had been told the night before of a hike along the Skyline Trail, and that people come from all over the world to do it, and that it’s a 4km walk on the northwest side of the island. Although it would be backtracking, we decided to do it and made our way back towards Cheticamp. The fog enveloped us about halfway there. Happily, it wasn’t very cold out. Perfect hiking weather.
With at least two dozen vehicles parked in the parking lot we knew it would be a busy trail. Tara-Lee wasn’t feeling well and she suggested I go alone and she’d rest back at the car.
What we had been told was “about a 4km return” was actually a 7.2km hike, so I set out to be efficient, and didn’t do the optional 9.5km loop, so I wouldn’t be leaving Tara-Lee for the entire afternoon.
In the highlands there is an abundance of moose (1,800+) and apparently after a very major tree loss in the 1970s and afterwards the moose just kept eating all new growth; in some areas the forest has been reduced to mostly grassland and small shrubs. There is one fenced off area you pass by where they are seeing/studying how the land can adjust back without moose interfering (yet allowing other smaller wildlife to still enter and exit the area).

Further along the trail there is a much larger fenced in area you pass through via gates, where parks staff are planting trees and native plant life to regrow (safe from the moose) to possibly return the park to what it was before, for the benefit of wildlife and the ecosystem of the area. It was really cool, but I forgot to take photos.

As well, as the path got closer to the sea, it became a walk along a structured wooden path to keep hikers off the local vegetation. 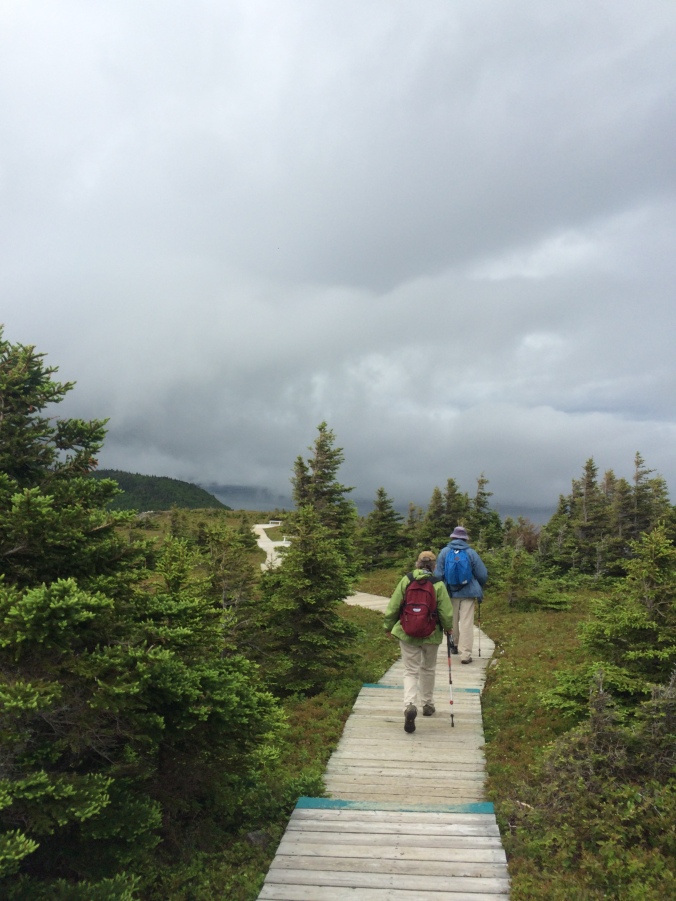 I made it to the lookout at the bottom of the stairs just in time to see a lovely view of the ocean, part of the Cabot Trail, and the shoreline, and then the looming fog blew in. Truly, only minutes passed before the view was nothing but white cloud.

This girl just hiked her very first solo hike! It was wonderful!

By the time I got back to the car, Tara-Lee was feeling much better and we decided to attempt to get down to Judique to see the Celtic Music Interpretive Centre before heading towards North Sydney to board the ferry to Newfoundland.

We made it with 25 minutes to spare before they closed, and found the exhibit to ourselves. We sped through reading the history of Celtic Music in the Maritimes, the fiddle, the bagpipes, traditional dancing, and even got to try out learning to play the fiddle- with REAL fiddles and bows they just left hanging on the wall for us to try. SO FUN!!

That’s all for this post! We will definitely miss the views and can’t wait to get back for more hiking and local music!!

One thought on “Cape Breton calls!! ”