It’s great to connect with friends on the other side of the world, not only for that friendly face, but because you likely speak the same language and don’t have to work hard to communicate. It was refreshing to meet up with Diana- with whom I worked at Cirque Du Soleil in Calgary on Amalula last summer. She is just in Paris this week with a friend so we have decided to get together several times to make use of good company. 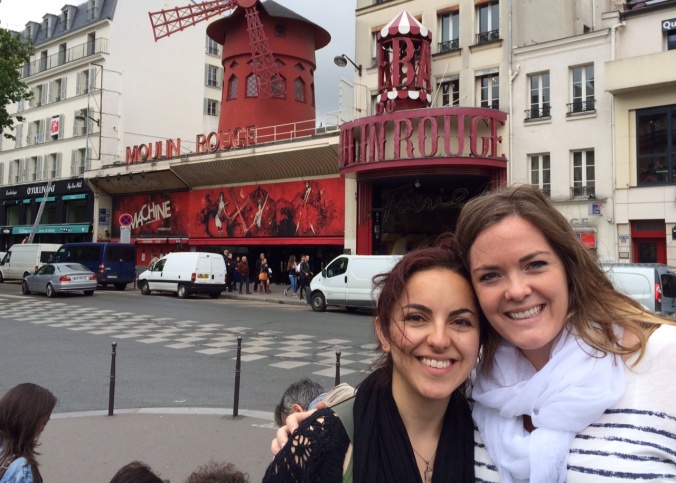 We planned our day around a couple ‘must-sees’ on Diana’s list, and I was happy to join in, as most of them were on mine. I met up with Diana and Lisa in Monmartre, so we could visit the Sacre Coeur and shops in the neighborhood. It was here that Diana and I discovered we had the same favourite movie – Amélie – and loved the references we knew in and around Monmartre. And as if we had planned it, there was a musician outside the Basillica playing the music from Amélie on his accordion. 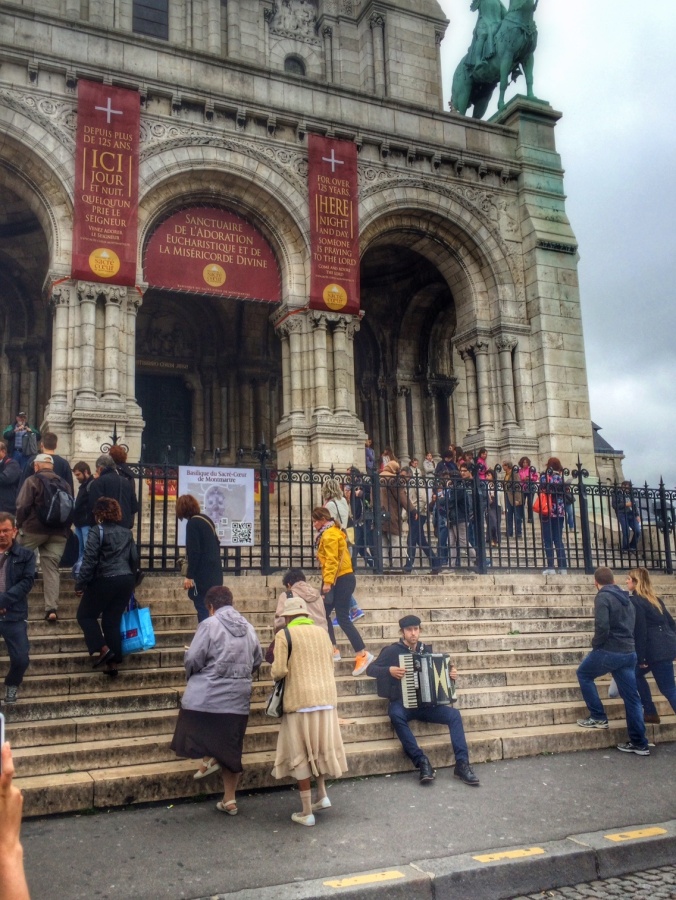 We then looked around Monmartre and truly stumbled across the Musée  Monmartre. I love stumbling across things- often they are some of the best discoveries on a trip! I wish I had thought to say I am a student, as that would have got me a better price on my entry to the museum, but oh well. I’ll be able to use that for the next month while I attend classes at L’Alliance Fancaise!! 🙂 but it was very nice to have an audiobook be included in the price of admission, so as we walked through the garden and rooms of the museum, we could listen to all the extra details you wouldn’t know. I don’t often pay extra for this so it was a nice treat to have. There is a lot of art related to the history of Monmartre, Le Sacre Coeur, the Moulin Rouge, and many of the artists that lived in the house now transformed into the museum, like Pablo Picasso. There was also an installation dedicated to the new 4-book comic book (or really, graphic novel) completed in 2014 about Pablo Picasso in his early years. 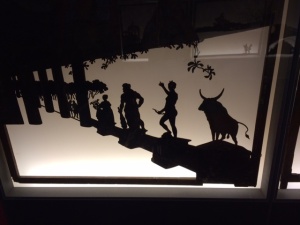 After that we grabbed some baguette sandwiches on our way to Notre Dame and the Bridge of Locks. I had heard of the bridge but had never been, so I’m glad Diana suggested it. Notre Dame was busy, and we didn’t go inside- though that has been highly recommend and I plan to do so later this summer. We delighted in the fact we had wifi (or “wee-fee” as the Parisians pronounce it), in the garden of Notre Dame. We also came across a British girls choir singing several pieces in the park, which was great.

I could easily create a gallery of the photos from the bridge of locks, because there are so many cool angles you can get! Apparently you write your name and your sweetheart’s name on a lock, lock it onto the bridge (or at this point, to another lock) and toss your keys into the Seine, and your love will last forever. I also found out that ACTUALLY the Bidge at Pont de L’archevêché is the place to lock your lover’s lock, while the (MUCH more empty) Pont Ds Arts is for your ‘committed love’. Maybe people have just been misinformed… As we saw a bride and groom lock a padlock on this ‘lover’ bridge and take photos of it… Do they know?? 😉

I wonder how many more locks that bridge can hold. It’s crazy! (They have been all cut off before, apparently.)

Ah L’Amour. Et puis, La Mort. We then took our travels to La Cimetière du Père Lachaise (Father Lachaise Cemetery). This is a huge Cemetery full of the oldest tombs I have ever seen. It was unbelievable and the atmosphere was romantic- in the Romeo-and-Juliet-tragic-romantic kind of way…

There is a large map at the gate (and we also picked up a free paper map at the main office, but did discover that the numbers on each did not match up, FYI)… And went to see a few specific tombstones- like Edith Piaf, Chopin, and Oscar Wilde, to name a few. You could often find the most ‘popular’/famous grave sites by looking for the most flowers or gifts on them. Some graves are so old they are covered in moss and you cannot see the name on them any more. Others have built-in planters with well-manicured or overgrown plants and flowers. We also saw one site that had been completely taken over by a large tree that had grown out of the centre of the plot.

The cemetery truly goes as far as the eye can see. 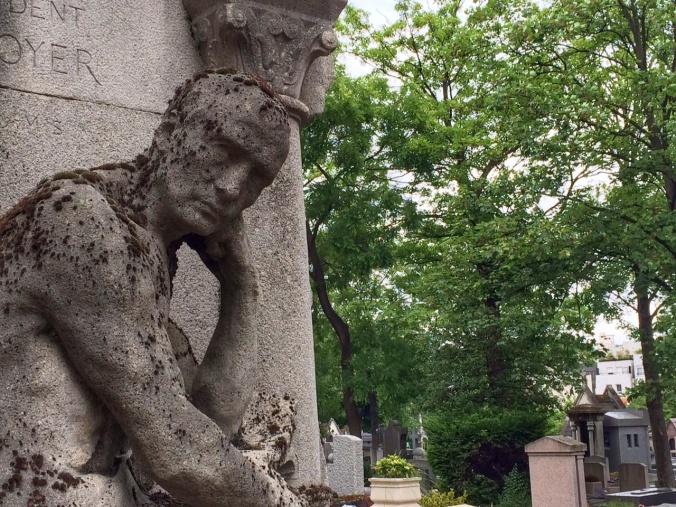 I had no idea that it became ‘the thing to do’ for women visiting Oscar Wilde’s tomb to kiss it, so they had to put a protective glass box around it to keep it from getting covered in lipstick. Now, people kiss the glass…

“Never love anyone who treats you like you’re ordinary.” -Oscar Wilde

It was then we decided on Mexican food for dinner, and Nutella and Speculaas crêpes for dessert. I had never had one, and was told that they are the greatest things ever, so of course we had to document it. So exciting!

Diana taking a picture of Lisa with her crêpe

My crêpe. It was ridiculously delicious.

It was fun to introduce the girls to my favourite view of the Eiffel Tower, as they had only seen it from the south side. We took the metro to Trocadero Station, and got some good photos in before heading down to the base at the perfect time to catch the first sparkling lights of the evening at 10:00pm.